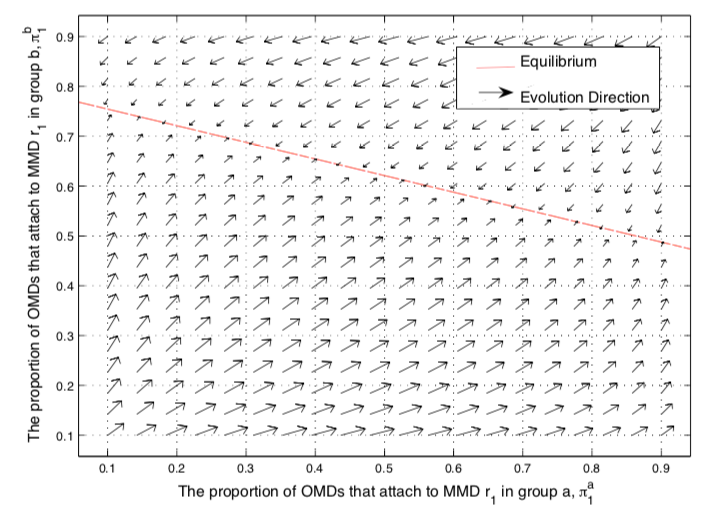 Devices with multi-homing capability can access multiple wireless access networks simultaneously. As an emerging technique, cooperative device to device (CD2D) communication has been considered to be a solution to capacity shortage problem. Combining multi-homing and CD2D techniques together can potentially improve network performance. We propose a novel multi-homing CD2D (MH-CD2D) network, in which multiple homing mobile devices (MMDs) act as relays for the cooperative communications of ordinary mobile devices (OMDs). We formulate such joint bandwidth-relay allocation problem as a two-stage game, in order to deal with two challenges: 1) how to design incentive mechanisms motivating MMDs to lease spare bandwidths to OMDs; 2) how to help OMDs to choose appropriate MMD relays. In the first stage, we use a non-cooperative game to model the competition between MMDs in terms of shared bandwidth and price. In the second stage, we model the behavior of OMDs selecting MMDs by an evolutionary game. We prove that there exists Nash equilibrium in the game and propose a distributed incentive scheme named IMES to solve the joint bandwidth-relay allocation problem. Extensive simulation results show that the equilibrium can be achieved and the best response price of one MMD increases with the other’s best price in the Stackelberg game. The utility of MMDs increases with the number of OMDs in each OMD group at the evolutionary equilibrium. The proposed algorithms are able to reduce the average service delay by more than 25% in comparison to the randomized scheme which is frequently used in the most existing works. On average, IMES outperforms existing scheme by about 20.37% in terms of utility of MMDs.